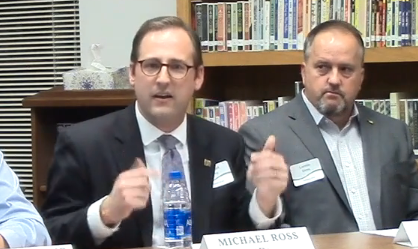 In a candidate forum held last Thursday, Michael Ross stood out as the only candidate to offer a clear vision and leadership to address the challenges facing Oklahoma.

Ross, a public school teacher in his 15th year and father of a student in Jenks Public Schools, squared off against Heather Chenoweth, J. Lee Miller, and Lonnie Sims in a forum sponsored by the Bixby and Jenks PLACs, a grassroots parent advocacy group. It was the only forum of the general election and the first time all four candidates had been present since a similar forum in the spring. Chenoweth, Miller, and Ross previously met up in a town hall hosted by TCTA at Webster High School held during the primary season, to which Sims was invited but elected to not attend.

On topics ranging from the budget crisis to infrastructure to mental health services for students, Ross presented clear proposals with supporting data and evidence, while other candidates relied on vague statements, showing himself to be the candidate most well-prepared to handle the challenges of the legislature.

Video provided by the Bixby/Jenks PLAC.